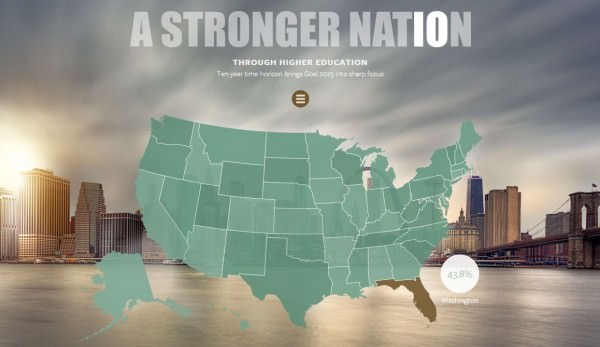 Last year, the Lumina Foundation, partnered with some other education groups, launched a nationwide campaign to get the percent of Americans with a college degree to 60 percent before 2025.

Recently, the foundation released research that shows how each in state in the country is doing in that regard. For example, using 2013 Census data, the report says 39.6 percent of Californians held a college degree or college-type credential. In Texas, the percent was 35.4 and Florida had 38.6 percent.

The foundation’s report, which can be viewed here, even breaks the percentages down to the county level. Polk County’s percent in 2013 was 28.16 while neighboring Hillsborough County was 40.9 percent. Among the highest percentages in Florida was Leon at 54.81 percent and St. Johns at 51.7 percent.