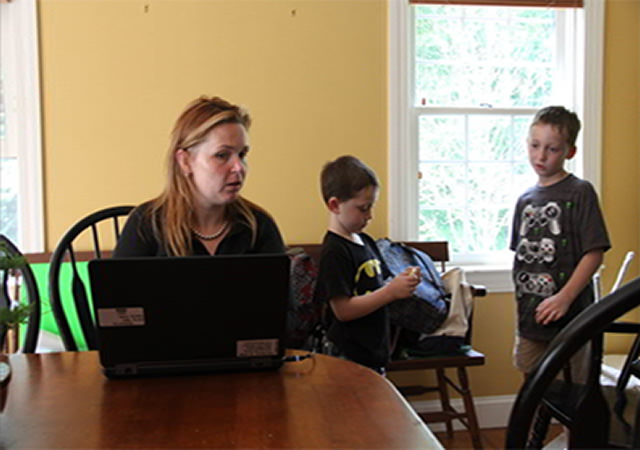 Corporate America is increasingly partnering with online higher education. First, it was Starbucks and Arizona State University. Then, it was Chrysler-Fiat and Strayer University in Virginia. Just this month, Chipotle got wrapped up in the movement. More businesses are paying for their workers to go to college, and employees are taking advantage of the opportunity.

After graduating from high school 19 years ago, Darby Conley promised herself she’d enroll in and finish college. She didn’t.

“I decided to play house with a boyfriend who I was going to marry and fall madly in love with. And that didn’t work out,” she says.

To support herself, Conley got a job as a customer service representative with Anthem, one of the country’s largest healthcare companies.

At 22, she tried night school and then online classes at the University of Phoenix, but it was hard to schedule classes around her busy life.

Twelve years later, Conley was married with two young children and pregnant with her third, and she was still about five credentials shy of her associate degree. But Conley and her husband were worried about taking on more student loan debt.

“I was still talking another twelve grand. I didn’t have that,” she says.

In 2013, Conley heard some exciting news.  Her employer, Anthem, announced it was piloting a free-tuition benefit through Southern New Hampshire University’s online program.