First-Generation Students’ Struggle to Be Ready for College 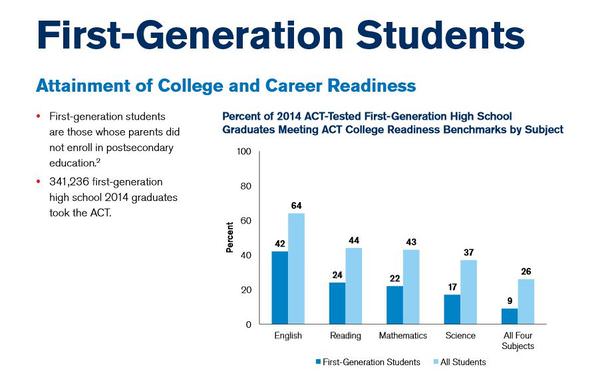 Many children whose parents didn’t go to college aim for degrees in higher education, but they’re far less prepared to go to college than their peers who grew up with college-educated parents, according to a new report.

The Condition of College & Career Readiness 2014: First-Generation Students, released last month by ACT and the Council for Opportunity in Education, repeats what we’ve long known: Family education background exerts a powerful influence on students’ readiness for college. But a look at the hard numbers is a bracing reminder of how much support first-generation college students need, and how often our schools are falling short of providing it.

Looking at the “first-generation” students—the students whose parents didn’t go to college—you can see right away how they’re a step behind their high school classmates. Ninety percent of the first-generation students who took the ACT said they planned to go to college, but 52 percent didn’t reach a single one of the score points on the ACT that are associated with the likelihood of success in college. In the bigger pool of all students who took the ACT in 2014, 31 percent failed to reach any of those “college-readiness benchmarks” on the test.